The term preventive care denotes a type of care aimed at avoiding the occurrence of a disease (primary prevention, e.g. using vaccination), or at identifying a disease as early as possible in order to initiate treatment without delay and thereby reduce its mortality or severity (secondary prevention, e.g. cancer screening programmes).

Preventive care is to be distinguished from curative care, which is only initiated when a disease has manifested itself with the onset of symptoms.

In the broadest sense, prevention is a responsibility of both the individual (keeping a healthy diet, exercising, giving up smoking, etc.) and public authorities (organising screening campaigns, vaccinations, health education, etc.). In this report, we will only analyse prevention measures organised by the health system.

In Belgium, the area of preventive care falls into the scope of the federated entities, with some procedures remaining under the responsibility of the Federal State. For example, the Regions are in charge of organising cancer screening programmes, but the INAMI/RIZIV will reimburse the  examinations (cervical smear test, mammograms).

A country’s prevention policy requires the establishment of long-term strategies, since benefits will only become measurable after many years.

The Preventive Care section in this report contains 3 categories of indicators which have been selected in order to assess how well the Belgian health system achieves its prevention goals:

Summary of the indicators on preventive medicine

(a) Exclusing population residing in homes for the elderly and nursing homes, (b) Incidence of measles has a large variability depending of the occurrence of epidemics. 2017 was an epidemic year in Wallonia and Brussels, (c) Within the last two years for breast cancer screening, (d) Regular contacts with dentist is defined as patients having had at least at 2 contacts on 2 different years over a three year period, (e) data from 2012, (1) OECD Health Statistics 2018, NR: Not Relevant.

Vaccination is one of the most powerful and most cost-effective forms of preventive care. Not only does it protect immunised people individually, but it also ensures a certain degree of collective protection for the population.

The vaccination indicators selected in this report are subdivided into:

Four indicators have been selected in order to assess the vaccination status of the Belgian population of children and adolescents:

Vaccines against poliomyelitis, diphtheria, tetanus and pertussis are part of the vaccinations recommended by the European authorities. In addition, Belgium has signed the global commitment to eliminate measles, which implies an vaccination coverage of 95% for the first and second dose of measles vaccine.

Since vaccination is a regionalised responsibility, vaccination rates are measured via regional surveys on vaccination coverage organised by the Regions and Communities. These surveys are conducted every 3-4 years (every 5-6 years in Brussels). The ‘national’ rate is then calculated using a weighted average of the 3 regional rates.

Vaccination against seasonal influenza is considered as the most efficient preventive measure to reduce the frequency and severity of influenza virus infections. In Belgium, this vaccination is currently recommended (among others) for all elderly people aged 65 years and over, and for all people living in nursing facilities.

The WHO recommends a target vaccination rate of 75% for elderly people.

The proportion of elderly people (aged 65+ years) who were vaccinated against influenza during the past year is an important indicator for assessing preventive care accessibility. This indicator is calculated based on INAMI/RIZIV data regarding reimbursement of the vaccine.

Figure 2 - Coverage of vaccination against influenza in people aged 65 years and over, by district (2016)
Data source: IMA - AIM
Note: People residing in institution are excluded from the analysis (see section limitation in the technical fiche for details). 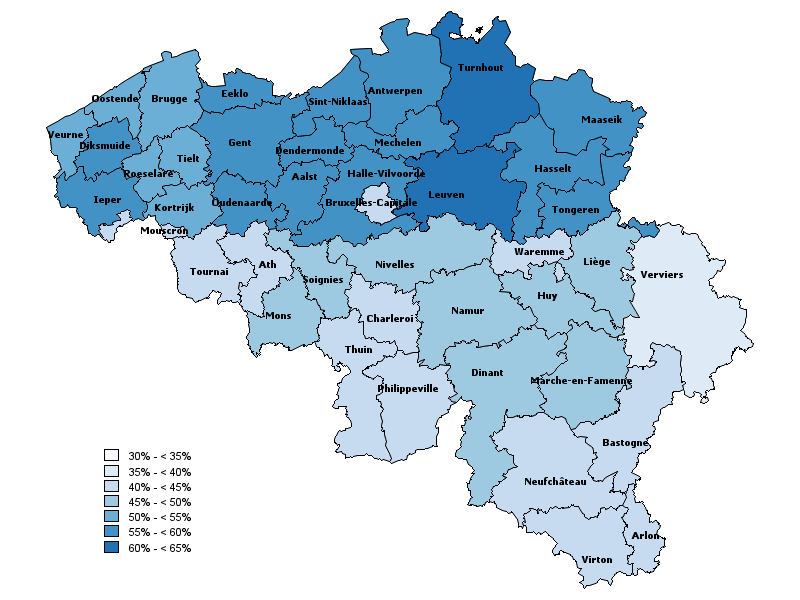 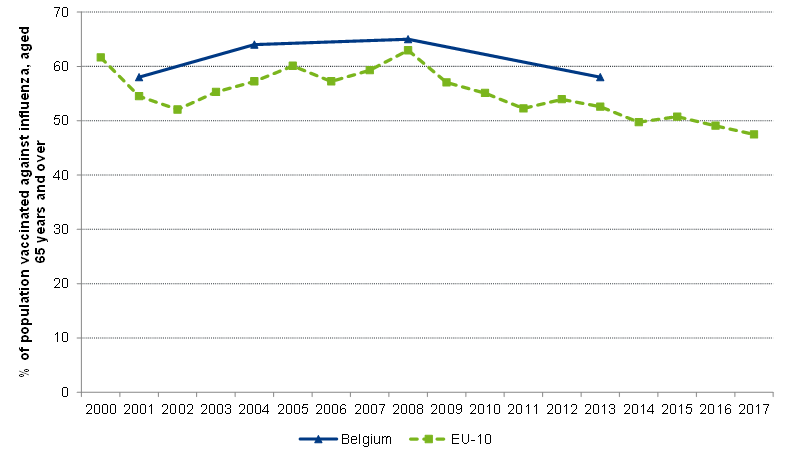 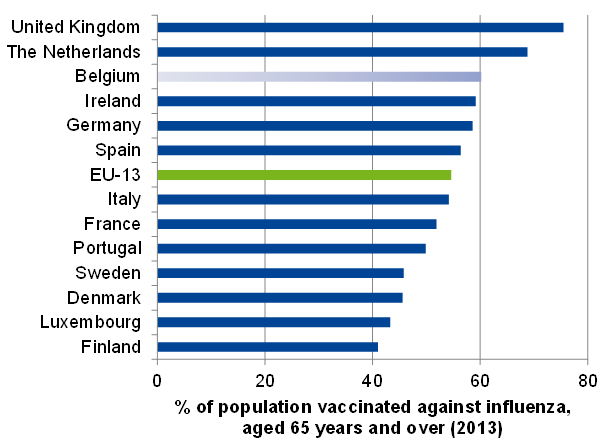 Measles is a highly contagious viral disease, whose complications are frequent (30%) and can be very serious: in 4 cases out of 1,000, they can cause brain lesions leaving permanent sequelae (measles-induced encephalitis), or even death. European countries have made a commitment with the WHO with the aim of eradicating this disease; the goal is to reduce the measles incidence rate to below 1 per million population.

Measles vaccination was introduced in Belgium in 1985. Since then, the incidence of this disease has been significantly reduced, but intermittent epidemics still occur. A fairly large epidemic occurred in 2011 and another in 2017, this latter mainly in Wallonia, and to a lesser extent in Brussels. These recurrences are likely due to some groups of people who are not, or not completely, immunised, including children whose parents refuse vaccination, but also adults who have never been vaccinated. This highlights the need to improve the vaccination coverage: continued targeted efforts are necessary, not only to reach the 95% coverage recommended by the Belgian Superior Health Council, but also to detect and vaccinate non immunised adults.

A cancer screening test is an examination aimed at detecting cancer (at an early stage) in people who have no symptoms and who seem to be in good health. This is very different from diagnosis, which is an examination (sometimes the same) performed in a person who shows symptoms (a ‘lump’ in the breast, blood in the faeces) and in whom cancer is suspected.  The purpose of screening is to reduce the overall mortality of the type of cancer concerned in the entire population, while early diagnosis is aimed at treating, and if possible extending the life of, the individual who is being tested.

Because screening concerns people who are (in principle) in good health, it is very important that the examination does not carry an excessively high risk, which would counter-balance the expected benefit at the overall population level. Therefore, a mammography exam or a colonoscopy – tests that involve a certain degree of risk, even minimal – cannot be used in the general population as long as there is no evidence that these examinations can help reduce the mortality rate in this population. For this reason, mammography exams are not recommended in women before the age of 50 years, nor is colonoscopy recommended for everybody as first line screening.

In this report, we have selected 3 indicators related to breast cancer screening.

Breast cancer is the most common type of female cancer, and the main cause of death by cancer in women (approximately 20% of all deaths due to cancer in women).

Since the beginning of the 2000s, there has been a national breast cancer screening programme in Belgium for women aged 50 to 69 years. In this age group, each woman is invited every 2 years, to participate in this programme in an approved radiology/senology department, free of charge. The mammograms performed in the framework of this organised programme follow a standardised procedure defined by European quality standards. The age group of 50 to 69 years was set because this is the age when early breast cancer screening is most likely to lead to a healthy outcome. This organised screening programme is under the responsibility of the Regions, but mammography exams are reimbursed by INAMI-RIZIV.

In practice, it is also possible for women to get screened outside of the organised programme, using therefore the “diagnostic” path for screening purposes. This type of "screening" (called ‘opportunistic breast cancer screening’) generally consists in a clinical examination by a specialist, a mammography exam, and often an ultrasound exam. This more expensive examination is not done on an invitation, but at the individual’s own initiative. There is no evidence to demonstrate that it is more efficient than organised screening, particularly since it is not standardised and not subject to quality controls. It is reimbursed by INAMI/RIZIV as a diagnostic test.

It is interesting to consider these two indicators together, as the first provides a measurement of attendance to the organised screening programme , and the second measures the total coverage of women (in the recommended age group). A 75% coverage is usually recommended for this intervention to reach an acceptable cost-effectiveness level. 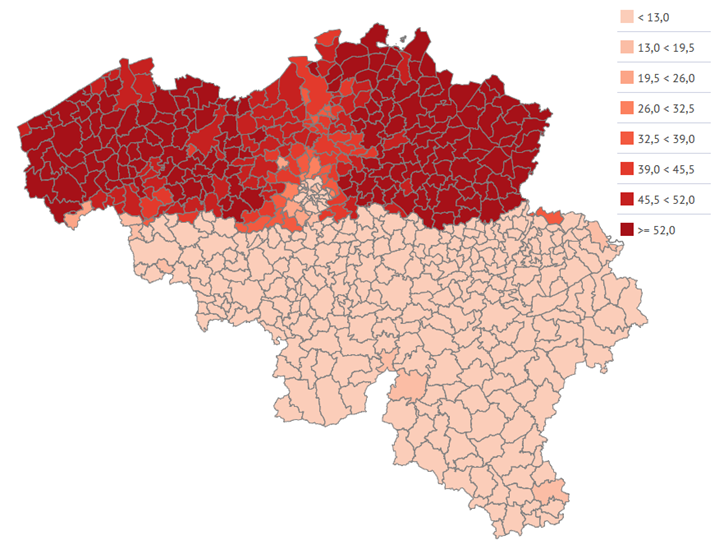 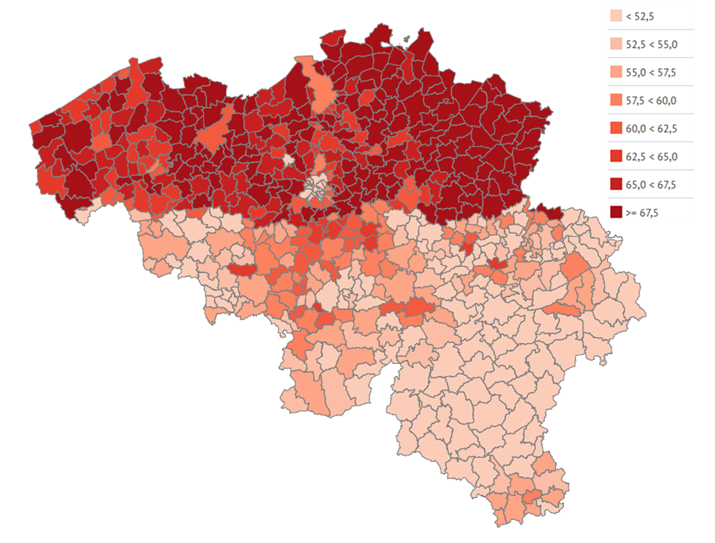 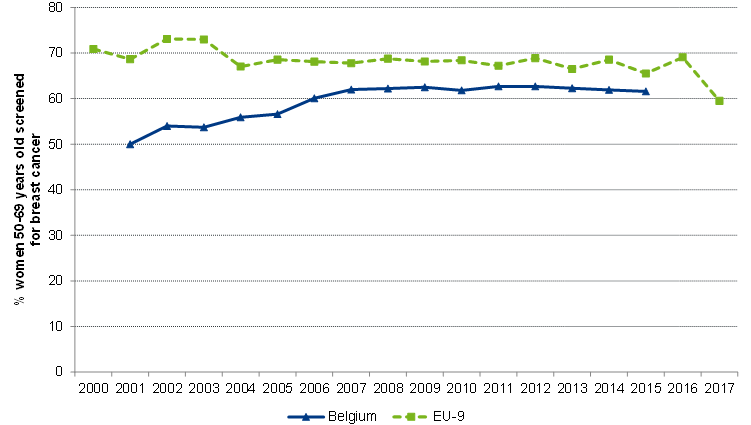 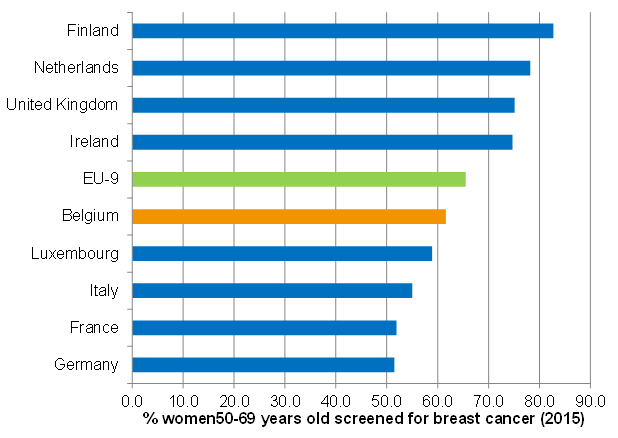 The national breast cancer screening programme is intended for women aged 50 to 69 years, as recommended internationally (for women who do not have a known family history risk). There is currently no evidence that an extension of such a programme to younger women (41 to 49 years of age) would help reduce the number of deaths due to this type of cancer. The risks linked to an extension of the period where women are exposed to the radiation delivered during mammography exams are also unknown. Research is, however, under way to understand whether it would be appropriate to modify the age limits and modalities for breast cancer screening.

The indicator "percentage of women aged 41 to 49 years having been screened within the past 2 years" therefore provides a measurement of the extent of over-screening and inappropriate screening tests.

Oral Health : Proportion of population which has regular contacts with a dentist (P-11)

Eating, talking, confronting other people’s looks, all this becomes more complicated when one does not have good teeth! But oral and dental health is also important for health in general, since bad teeth can promote the development of diseases (including cardiovascular diseases). Regular visits to the dentist’s help diagnose and treat dental problems before they become too serious, but also prevent them, either by making people aware of preventive behaviours (e.g. proper tooth brushing), or by performing prophylactic procedures (e.g. tartar removal, application of fluoride treatments).

In addition, it is known that socio-economically unfavoured people have less access to oral and dental healthcare and are not sufficiently informed about the importance of preventive behaviours in this area.

Measuring the proportion of the population (aged over 3 years) who have regular contacts with a dentist is therefore a good reflection of preventive care accessibility. 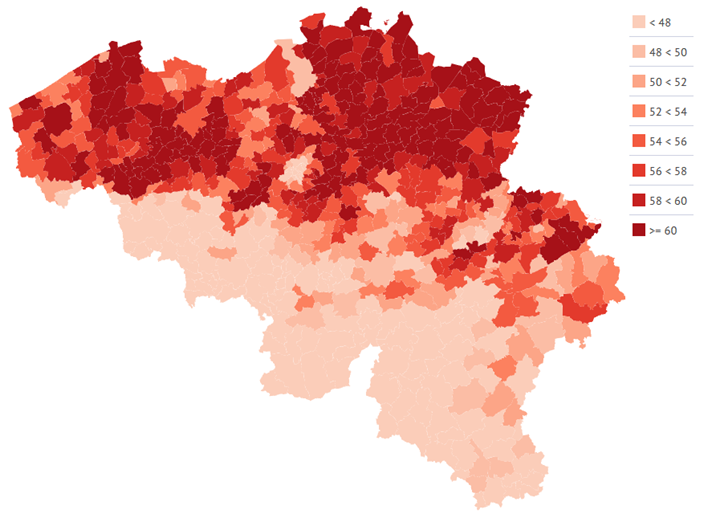