In Belgium, as in most industrialised countries, the mental healthcare sector has undergone several reforms since the end of the 20th century. The purpose of these reforms was to bring, as much as possible, people with mental disorders back to their native environments and social communities. The focus was therefore on types of care that were increasingly incorporated into people’s living environment, and no longer on mental hospitals (de-institutionalisation).

In Belgium, the mental healthcare situation is fairly complex, as this responsibility has been de-federalised. For instance, the Federal bodies are responsible for paying psychiatrists and psychiatry services within hospitals, while the federated entities are in charge of organising and funding outpatient mental health services. As for independent clinical psychologists, most of them are covered neither by one system, nor the other. Due to this fragmentation of responsibilities, there is no single, standardised source of data that would cover the entire mental healthcare system. In particular, the absence of a unique patient identifier means that these patients cannot be followed throughout the mental healthcare landscape, especially as regards their outpatient care. Therefore, it remains very difficult to assess the performance of the mental healthcare sector.

In this report, we have selected 11 indicators related to mental health. They therefore provide only a partial picture of the performance of the mental healthcare sector. Two of these are contextual indicators (Suicide rate for Belgium and Number of hospitalisation days in a psychiatric unit), and the other indicators can be presented under specific dimensions of our conceptual model:

Summary of the indicators on mental health

Death due to suicide (MH-1)

Suicide can be the result of a combination of extremely variable psychological, social and demographic factors, such as crisis periods due to disruptions in personal relationships (separation, mourning), but also to alcohol and drug abuse, unemployment, depression or other forms of mental illness. For this reason, the suicide rate is often used as an indirect indicator for a population’s mental health status, but it remains controversial due to its instability and measurement difficulties. Moreover, this indicator is often criticised for the lack of relationship between suicides and the quality of care provided. This contextual indicator must therefore be interpreted as part of a broader context, in combination with other mental health indicators. However, some improvements are clearly possible, for example with regard to patient monitoring. 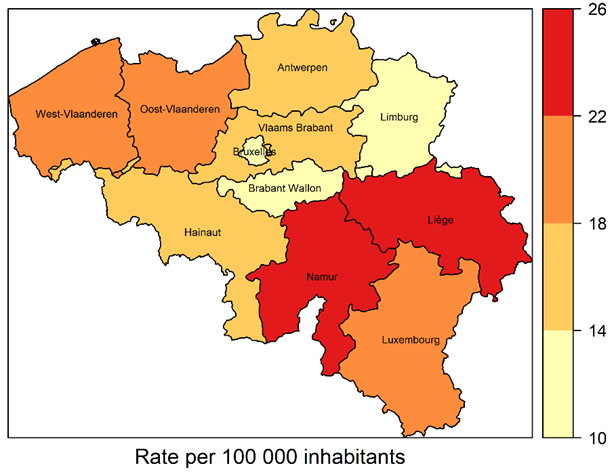 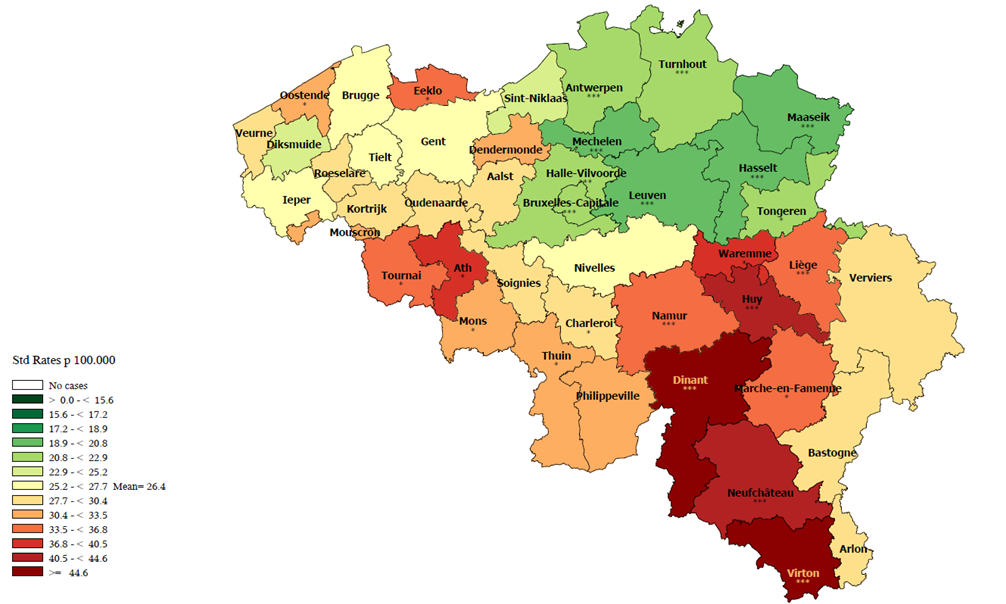 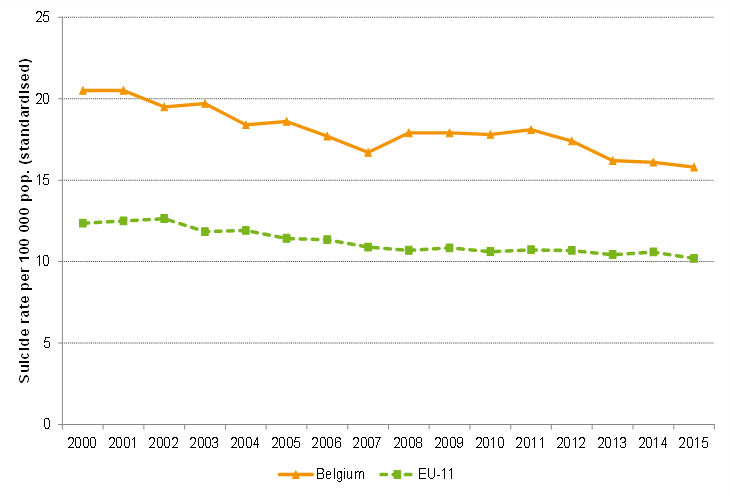 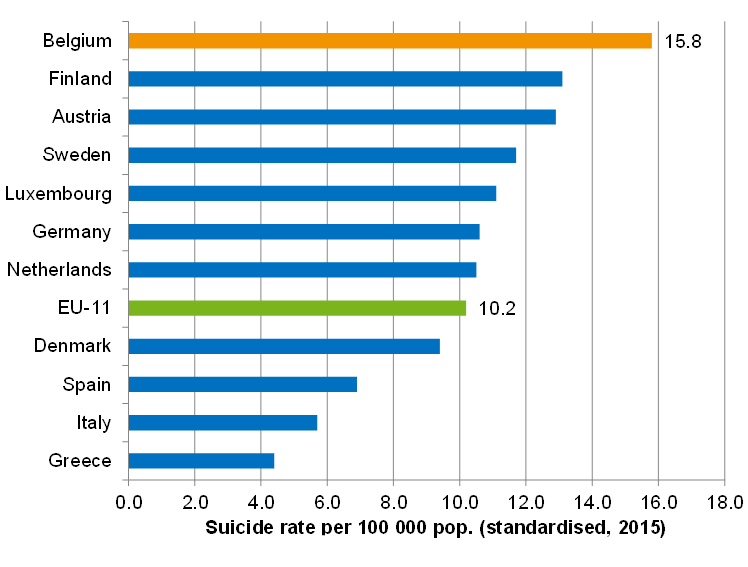 People who are confronted with mental health problems can receive help from various kinds of professionals, but international indicators are primarily about psychiatrists due to their pivotal role in the mental healthcare system, and also because the availability of data about other players, such as psychologists, is more limited.

The term ‘psychiatrist’ means a physician who has completed a specialisation in psychiatry; they may also have additional training in a sub-specialty of psychiatry (e.g. child and adolescent psychiatry). Neuropsychiatrists and neurologists are not included.
The number of practising psychiatrists is a reflection of accessibility of mental healthcare. 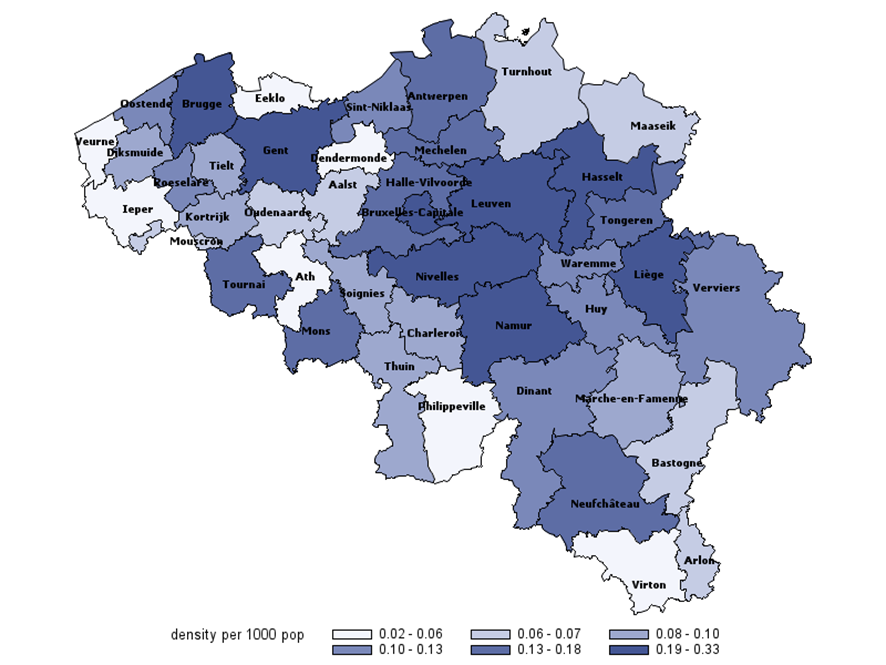 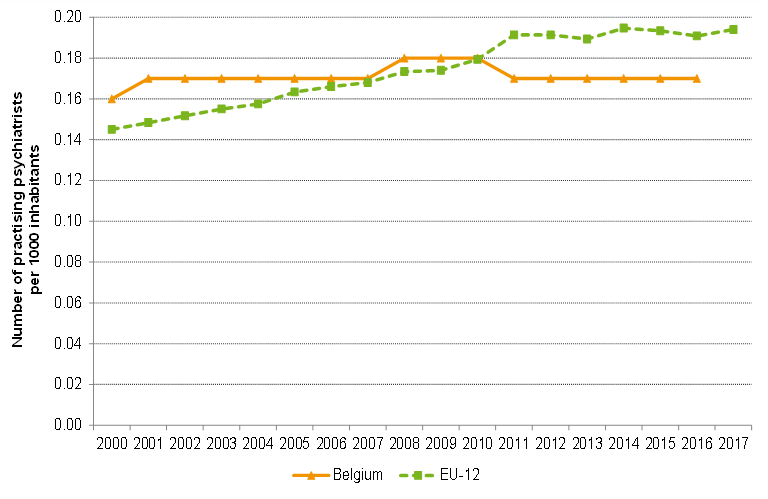 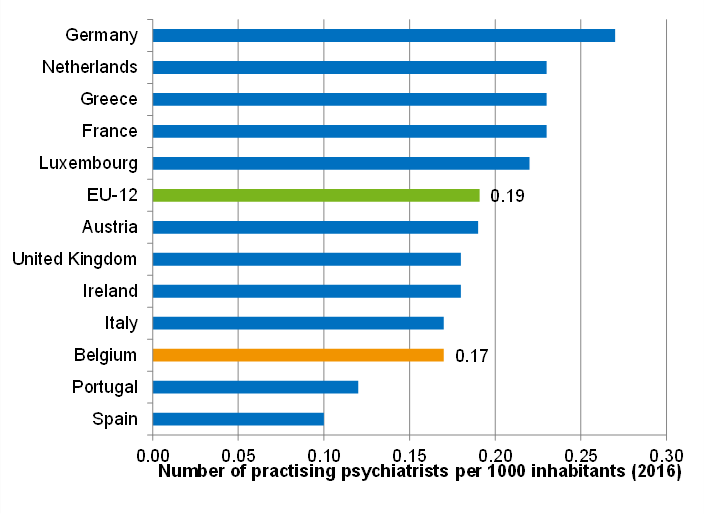 Long waiting times are an important sign of accessibility of care issues. Whenever mental health is involved, excessive waiting time can have an impact on the person’s psychological state, or even increase the risk of hospitalisation or suicide. It is also a known fact that the longer the waiting time, the less patients actually attend their appointments. Speed of access to mental healthcare services may therefore be considered as a key element in improving the mental healthcare system.

As explained previously, there is no uniform source of data on mental healthcare due to the division of responsibilities between the Federal authorities and the federated entities. In this report, we use the data published for Flanders (Agentschap Zorg en Gezondheid, the Flanders Agency for Care and Health). The 20 centres for mental healthcare (Centrum voor Geestelijke Gezondheidszorg) which are under the responsibility of the Flemish authorities are required to submit twice per year a collection of data based on their electronic patient records; waiting times are part of this data. 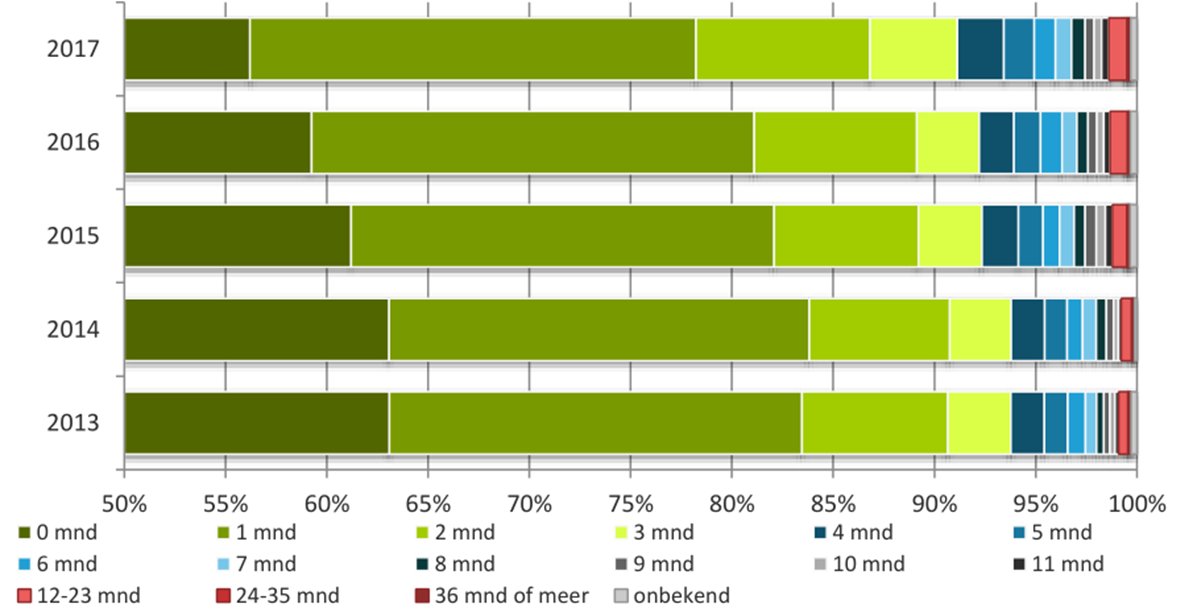 Involuntary committal (or placement under observation, also  known as forced admission) is subject to specific conditions which are stated in the Law of 1990: the person must be suffering from a mental illness, he/she must constitute a danger for him/herself or for society, and there can be no other treatment option, such as voluntary admission or treatment at home.

A key objective of the mental healthcare system is to offer appropriate treatment, support and protection to individuals with serious mental illnesses, while maintaining unnecessary involuntary committals to a minimum. Involuntary committal is indicative of a crisis episode, but it can also help understand whether the mental healthcare system is able to provide alternative forms of care to more complex patients. In addition, it is a known fact that the risk of involuntary committals is higher among people belonging to ethnic minorities.

In order to better protect psychiatric patients, most European countries have reformed their laws on mental patient protection and revised the criteria for involuntary committal. Despite these reforms, differences can still be observed between countries and between regions with regard to how this method is used. In some Western European countries, the figures are rising, yet this cannot be explained by an increased prevalence of serious mental disorders.

A high rate of involuntary committals should be considered as a sign of lack of appropriateness of mental healthcare.

The use of emergency departments for reasons related to mental health and/or social problems is considered as an indicator of poor coordination of care and failure of community mental health services. Indeed, if people having difficulties had access to outpatient care and could begin treatment before reaching a crisis situation, emergency rooms would no longer be used as a rescue solution. The excessive use of emergency rooms for mental, social or psychological problems is also a concern due to the level of saturation which this entails in these departments, meaning lower quality of care and an increased risk of medical errors.

Emergency departments need to have specialised staff that is able to address psychological and/or social crisis situations, or, at a minimum, every citizen needs to have an option to access immediate mental healthcare services at any time.

A high rate of visits to emergency rooms for mental and/or social health reasons should be considered as a sign of lack of appropriateness of mental healthcare.

Figure 12 - Proportion (%) of visits in emergency rooms for social, mental or psychic reasons or suicide attempts by district (2016)
Data source: National feedback on the use of emergency services
No data for the following districts: Bastogne, Diksmuide, Philippeville, Virton and Waremme.

Based on global level figures (WHO), it is estimated that 4 to 10% of people are affected by depression at one time or another of their lives. Women are 1.5 to 2.5 times more often affected than men.

Antidepressants are medicines that are effective for treating severe depression, panic and anxiety disorders, and obsessive-compulsive disorders (OCDs), but in order to be effective, they must be taken for at least 6 months, ideally in combination with psychotherapy. Theoretically, they are not indicated for light depression.

An increase in antidepressant prescriptions can be observed throughout Europe, but the Belgian figures are generally higher than the average for other European countries, while the causes for this situation are somewhat unclear. Several Belgian studies report inappropriate use of medicines (poor indication, inappropriate duration of treatment, poor choice of medicine).

Four indicators have been selected to assess the relevance of antidepressant prescriptions:

One should also bear in mind the fact that antidepressants can also be prescribed for reasons other than depression, including obsessive-compulsive disorders (OCDs), anxiety disorders, social phobia, post-traumatic stress disorder, or certain forms of chronic pain. 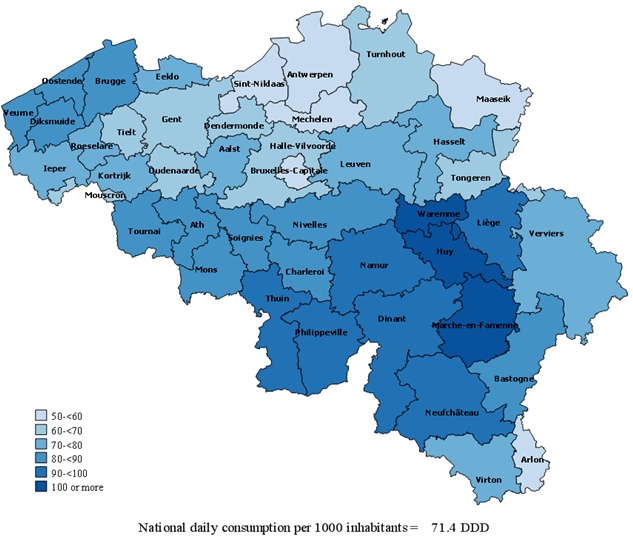 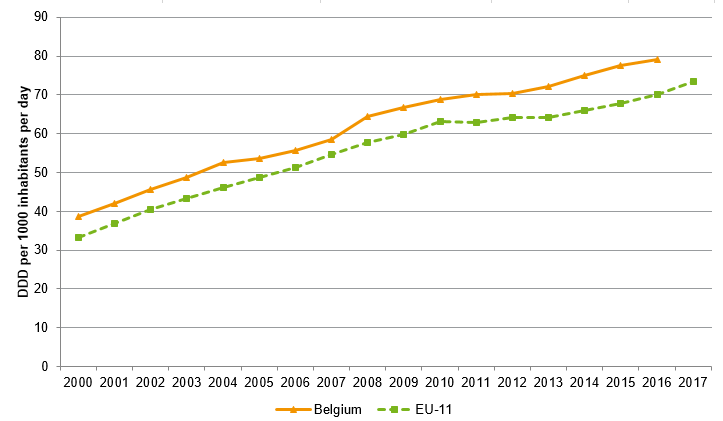 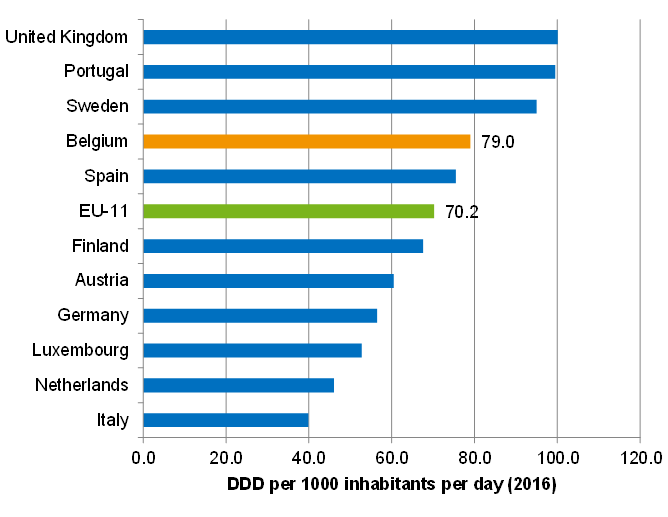 Proportion of antidepressant treatments taken for (too) short periods (MH-8)

In Belgium, as in many other Western countries, the mental healthcare sector has undergone a number of profound reforms. As a very brief summary, these reforms have been aimed at evolving from a model based on ’large isolated institutions (asylums)’ towards one where care is provided as close as possible to the patient’s natural living environment. A decreasing tendency should therefore be expected in the number of hospitalisation days in psychiatry hospital wards.

This contextual indicator helps determine this change, although, evidently, the number of hospitalisations in hospital psychiatry wards represents only a relatively small proportion of the total number of people requiring mental health services. 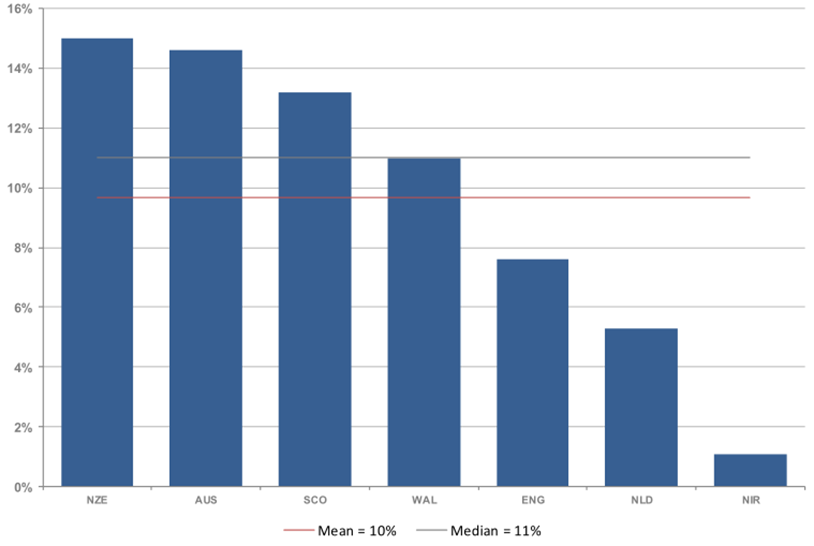