A health system that works well should remain financially accessible to the largest number of people. If anyone has to restrict or postpone necessary care or treatments due to (excessively) high costs, or give up other basic needs in order to pay for such care, then the health system is considered to be of poor financial accessibility. In addition, stopping or delaying a treatment because of its cost may have harmful consequences for people’s health in a more or less long-term perspective, which may involve higher health expenditure.

In this report, financial accessibility is measured by the following indicators:

Healthcare insurance status of the population (A-1)

This indicator measures the percentage of population affiliated to a sickness fund that is covered by the compulsory health insurance. Belgium has a compulsory health insurance system which, in principle, covers the entire population: salaried employees, self-employed, public servants, the unemployed, pensioners, people entitled to increased reimbursement (‘BIMs’), the disabled, students, foreign nationals (residents), as well as all their dependants.

Note: Uninsured people are not necessarily excluded from healthcare, as their expenses are most often paid by municipal public social care centres (CPAS).

This set of indicators measures the share of healthcare expenditure which is not covered by the compulsory health insurance system and is, therefore, directly charged to patients:

RESULTS
Out-of-pocket payments (OOPs), expressed as a percentage of current expenditures on health (A-2) : 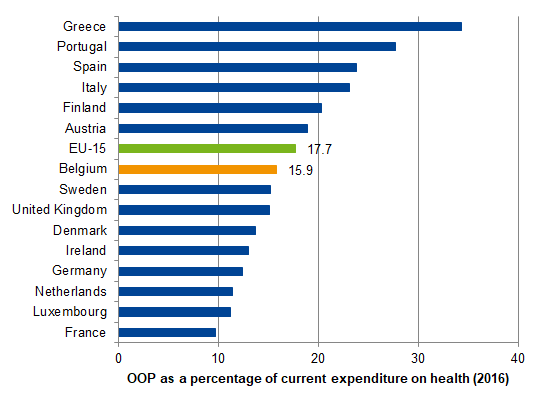 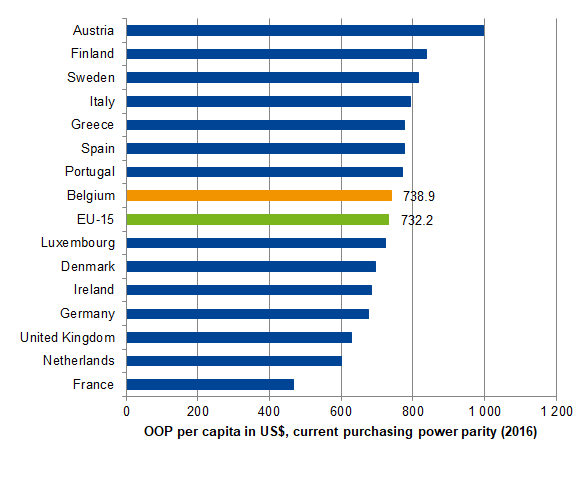 Out-of-pocket payments (OOPs), expressed as a percentage of final household consumption (A-10) :

Out-of-pocket payments (OOPs) for dental care, expressed as a percentage of current expenditure on dental care (A-11)

Postponement of care due to financial reasons (A-4)

The primary indicator is derived from the European Statistics on Income and Living Conditions survey (EU-SILC). This survey includes questions about obstacles preventing access to medical or dental examinations (including cost, but also distance, waiting time, etc.) and is done at an individual level.

The secondary indicator is derived from the Belgian Health Interview Survey performed by Sciensano, whose latest edition is dated 2018. This survey is done at a household level rather than per individual. The two indicators cannot, therefore, be combined together.

The question asked to the surveyed households was: “During the past 12 months, did you, or did a member of your household, require any care (medical care, surgery, dental care, prescription medicines, eye glasses or contact lenses, mental healthcare), but had to postpone it because you could not afford it? ”

The percentage of households delaying contacts with healthcare services in the Eurostat database (EU-SILC) brings some additional information:

By calculating the density of conventioned practising health professionals per province and per district, important information can be obtained, both in terms of financial accessibility and geographical accessibility of healthcare. We have chosen to measure this density for general practitioners (as well as, as a sub-indicator, for medical specialists, represented here by gynaecologists) (A-12) and for dentists (A-13). The density is expressed in Full-Time Equivalents (FTEs).

RESULTS
Density of conventioned general practitioners (and gynaecologists) (A-12):

Density of conventioned dentists (A-13): 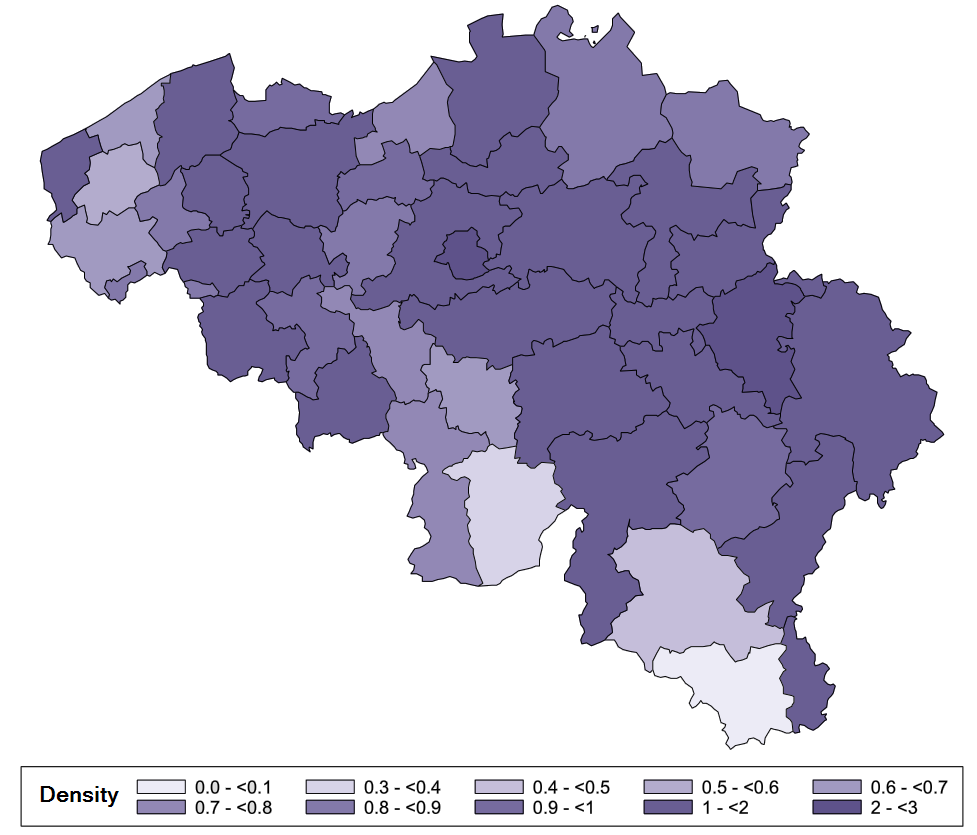 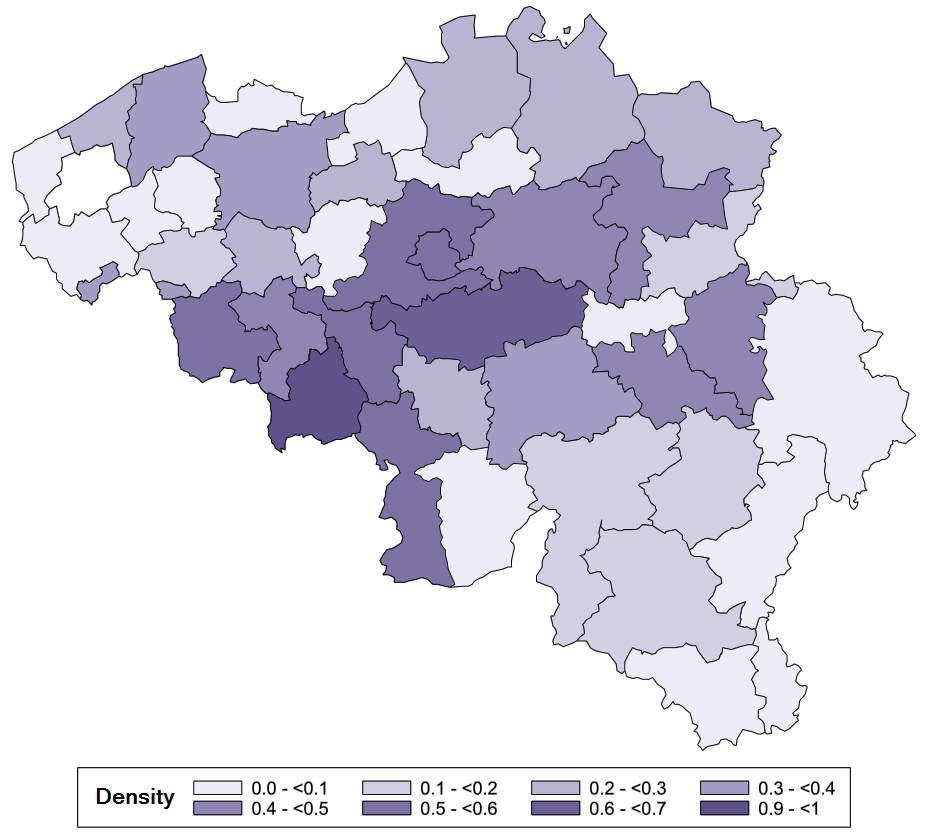 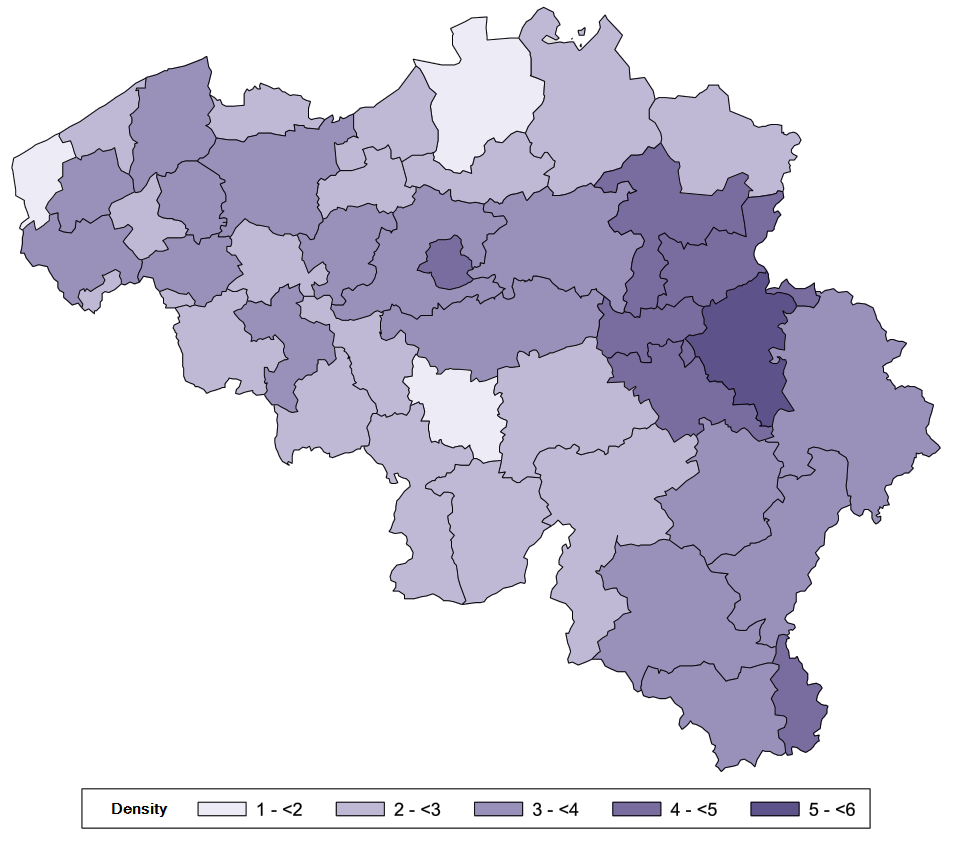 A-14    Proportion of fee supplements

In the Belgian hospital system, physicians are allowed to charge fee supplements to patients who have chosen to stay in an individual room (except where the individual room stay results from a medical requirement or unavailability of another type of room). This allows these hospitals to attract physicians by offering them better financial conditions. Hospitals can also charge room supplements for occupying these individual rooms, whose amounts are left to the hospitals’ choice. Since 2013 (2015 for day hospitalisations), all supplements have been forbidden in two-bed rooms. Since this change, the number of fee supplements charged to patients has decreased, but their amounts have increased.

Most hospitalisation insurances reimburse – either in part or in full – the fee supplements charged to patients who choose an individual room. However, insurance premiums have been increasing – following the upward trend in fee supplements – and could become unaffordable for some people.