In the area of healthcare, the term ‘efficiency’ denotes the ratio between what has been invested into the systemand the results obtained, which may take the form of life years gained, a gain in quality of life, a positive experience for the patient, reduced absenteeism, less health inequalities, etc.

Improving the efficiency of healthcare is a crucial political objective in these times of rising costs and growing healthcare demand. Measuring efficiency helps determine whether the resources invested into the healthcare system are bringing the best ‘ROI’, measured in terms of health benefits for the people.

Other indicators related to more limited parts of the system (e.g. the hospital sector) have the advantage of leading more easily to specific recommendations and measures. However, result measurements at the hospital level are not widely available at this time.

Four indicators were selected in this report to assess the efficiency of the healthcare system: One-day surgical admissions rather than inpatient surgical hospitalisation (E-1), use of low-cost medication (E-3), biosimilar treatments (E-4), and length of stay after a normal delivery (MN-9). This last indicator is interesting since it can easily be compared between countries.

Summary of the indicators of efficiency)

Although the indicators shown in the above table offer a positive picture of the Belgian healthcare system efficiency, they only cover one part of this concept. Other indicators analysed or mentioned in this report also provide indications about the system (in)efficiency. These include geographical variations in care practices (which may be indicative of over- or under-use of care), screening outside of target groups, excessive use of some tests/equipment (i.e. medical imaging) or some inappropriate treatments (treatment of major depression too short): all these are examples of inefficiency which are often analysed in the international literature.

The table below shows a few examples of inefficiency indicators which are commented in other sections of this report, but a very large number of other indicators addressed elsewhere in this report can be re-interpreted from the angle of efficiency.

Examples of sources of inefficiency

The term one-day surgery is used when a patient who has been operated leaves the hospital on the day of their surgical procedure (planned in advance), for example after a knee arthroscopy, a tonsillectomy or an inguinal hernia procedure. This type of surgery has been gaining significance in the past ten to twenty years.

Compared to standard hospital stays, one-day surgeries are more cost-effective as the nursing staff is mobilised more efficiently and the infrastructure is used more intensively. The proportion of surgical procedures performed as one-day surgeries (compared to the total number of surgical procedures) may therefore be considered as an indicator of efficiency of the hospital system. One may also consider this as a sustainability indicator, since both are often closely related.

Use of cheaper medicines (E-3)

Promoting the prescription of cheaper medicines is a way of curbing health expenditure, both for the patient and for the health insurance system. For this reason, since 2005, physicians have been encouraged to prescribe a certain percentage of these cheaper medicines, and their prescription profile is subject to feedback from INAMI – RIZIV.

In 2015, because strong price differences persisted among the cheaper medicines, it was decided to encourage prescriptors to prescribe ‘thecheapest’. This is how the ‘cheaper medicine’ denomination came to be reserved for the three cheapest generic versions on the market (or for original medicines whose price has decreased to the level of the generic version) and for medicines prescribed by INN (International Non-proprietary Name = the name of the active molecule).

This measure helps save costs, both for the health insurance system and for the patients (since when the original medicine is prescribed, the patient must pay the difference out of pocket). Therefore, the percentage of cheaper medicines prescriptions is indeed an indicator of efficiency of the health system. 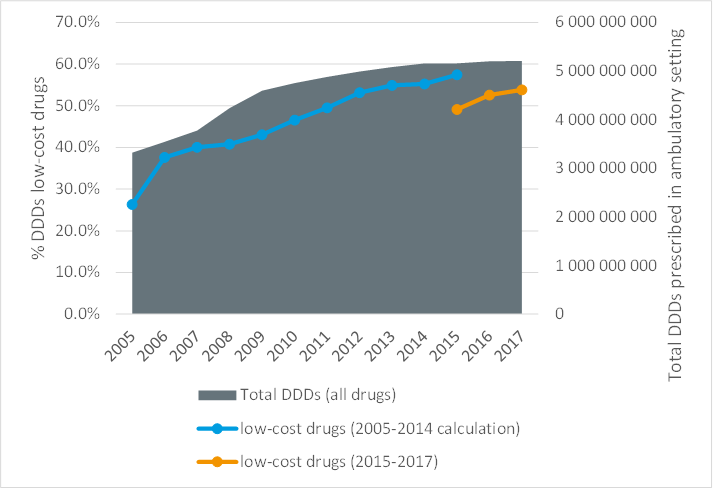 Use of biosimilar medicines (E-4)

As opposed to standard medicines which are manufactured through ‘chemical’ processes, biological medicines are produced by (or derived from) living organisms (bacteria, yeasts, etc.). They are protected by patents like all other medicines. When these patents expire, producing copies of the original biological products becomes authorised, and these copies can then be sold at a lower price, following the same principle as for generic medicines. The ‘generic’ versions of biological medicines are called ‘biosimilars’.

Biosimilars have been used in Europe since 2006. The Belgian authorities intend to encourage physicians to replace biological medicines with biosimilars wherever possible, following the same principle as for the generic medicine prescriptions (see previous indicator), in order to reduce expenditure both for the patient and for the authorities. 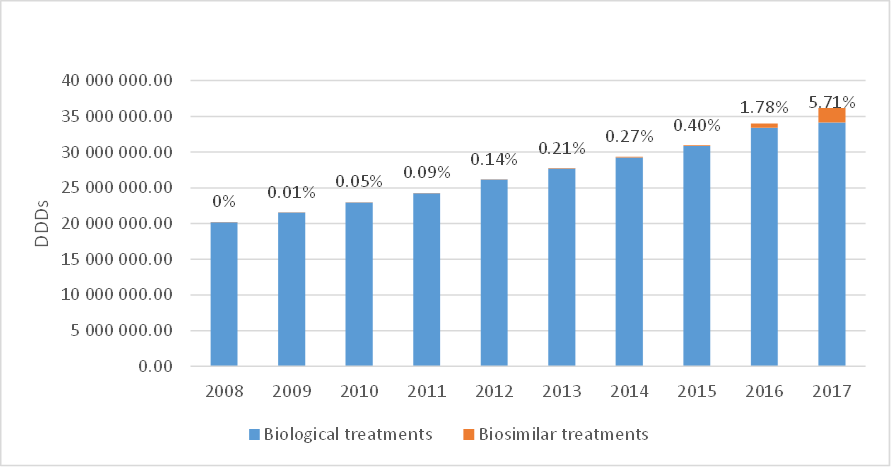