Chronic diseases are by far the leading causes of (premature and general) mortality. In addition, they are also one of the most relevant health problems with a potential impact on the health-related quality of life, especially for the elderly, and are one of the main reasons for the use of healthcare services. Especially among older individuals, multiple chronic diseases can be present simultaneously. This phenomenon, referred to as multimorbidity, has a considerable impact on the functional status and the quality of life of the population. It also causes an increase in healthcare consumption and a higher risk of complications due to a larger use of medication, and thus requires important resources mobilization.

Most of the main chronic diseases are preventable, e.g. by adopting policies that promote healthier lifestyles, better environment and facilitate healthcare access. The prevalence of chronic diseases is, therefore, an important indicator of the level of (ill) health in the population.

The Belgian Health Interview Survey (HIS) is one of the main sources of information on the prevalence of chronic diseases at the population level. The advantage of this source is that it also takes into account people who rarely or never make use of health care facilities. The results are weighted to match the population structure as much as possible. It is therefore a valuable tool to obtain representative information on chronic diseases prevalence at the population level (for the whole country or at the regional level), and to monitor this prevalence over time. However, the results must be interpreted with caution because the information is self-reported, and thus reflects individual perceptions of health that may differ from the actual health state. Indeed, some people may not report an illness because they are not (yet) aware of it, or because the disease is perceived as socially unacceptable.

This overview is only based on the self-reported diseases as reported in the Health Interview Survey. In Belgium, other sources are available on diagnosis-based prevalence of chronic diseases such as specific registries, general practitioner networks or health insurance databases. These sources will be used to provide in-depth information on selected chronic diseases. Since the prevalence of chronic diseases and conditions is strongly related to age, the comparisons over time or between regions have been made after correction for the age-structure (age-adjustment). The adjustment has been performed using direct standardization based on the Belgian population of 2018 as reference. The weighting related to the design of the HIS was taken into account when calculating standardized rates.

In 2018, 29% of the population aged 15 years and over reported suffering from at least one chronic disease. This percentage increases considerably with age, going up from 14% for people aged 15-24 to 44% for the people aged 75 or over.

The prevalence of chronic disease is significantly higher in women (31%) compared to men (27%).

Between 2001 and 2018, the percentage of people reporting to suffer from a chronic disease increased from 25% to 29% (+17%). This increase is partly due to the aging of the population, but not entirely since there is still an increase after adjustment for age.

Some differences are observed between the regions: the age-adjusted percentage of self-reported chronic diseases is higher in the Walloon region (33%) than in the Flemish and Brussels regions (respectively 27% and 31%). In the Brussels region, the crude self-reported prevalence of chronic diseases has dropped below the national average, but it is not the case when compared with the age-adjusted prevalence, which suggests an effect of the younger age structure of the Brussels region.

Age-adjusted self-reported prevalence of chronic disease in Belgium and its regions, 2001-2018
Source: Own calculations based on Health Interview Survey, Sciensano, 2001-2018 [1]

In 2018, 15% of the Belgian population over 15 years of age reported suffering from at least two of the following diseases in the past year: heart disease, chronic respiratory disease, diabetes, cancer, arthritis and/or arthrosis, and hypertension. This percentage increases strongly with age, going up from 0.8% for people aged 15-24, to 42% for the people aged 75 and over. The prevalence of multimorbidity is higher in women, but this difference is no longer statistically significant after adjustment for age.

Between 1997 and 2018, the crude prevalence of multimorbidity increased from 8.9% to 15% (+71%). When considering the age-adjusted prevalence estimates, the increase is less important but still significant (+26%), which means that the increase is partly, but not only, due to the aging of the population.

In the Walloon and the Flemish regions, the age-adjusted prevalence of multimorbidity is higher (respectively 17% and 15%) than in the Brussels region (14%), where it has decreased since 2013. However, this decrease is not significant.

Age-adjusted self-reported prevalence of multimorbidity in Belgium and its regions, 1997-2018
Source: Own calculations based on Health Interview Survey, Sciensano, 1997-2018 [1]

The percentage of people reporting living with at least two chronic diseases decreases as their educational level increases, from 19.8% in people with no diploma or only a primary school education, to 13.3% in people with the highest level of education.

The top 6 of the most commonly reported chronic diseases is the same in men and women, although the order differs. The top 6 comprises three problems of the musculoskeletal system (low back disorders, neck disorders, and arthrosis), two cardiovascular risk factors (high blood pressure and high blood cholesterol), and allergy. 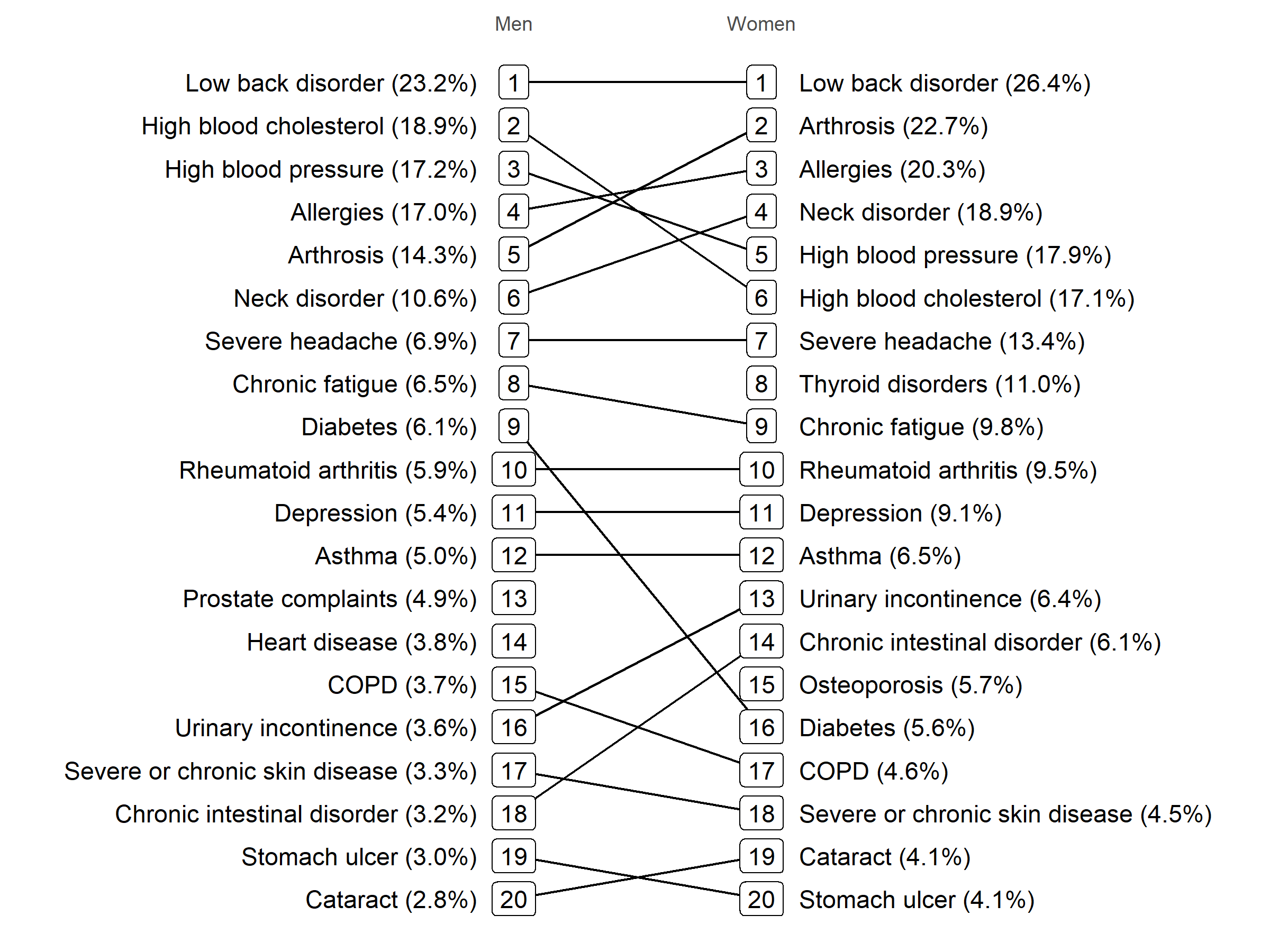 Since 2013, the top 6 remained the same in men but not among women, for whom allergy and neck disorders have taken the place of high blood pressure and high blood cholesterol as third and fourth most important disease, respectively.

The evolution in terms of prevalence differs in function of the specific disease:

1. Between 1997 and 2018, significant increases were observed in the prevalence of high blood pressure, low back disorders, neck disorders, arthrosis, diabetes, thyroid disorders, and allergy. These increases may in part be explained by the aging of the population; however, even after adjustment for age, the increases remained significant.

2. On the other hand, since 2001, the prevalence of a number of other chronic diseases has decreased, including coronary heart disease, chronic obstructive pulmonary disease, severe headache and migraine, and osteoporosis.

Regional differences in the prevalence of the included diseases are generally quite limited. The following differences are observed:

View the metadata for this indicator

Chronic disease
In the Belgian Health Interview Survey, a global question is asked on the presence of one or more chronic diseases, chronic conditions or handicaps, without specifying the nature of the disease, condition or handicap. For the sake of simplicity, this indicator is referred to in this report as the presence of “chronic disease”.
Non-communicable diseases
Non-communicable diseases (NCDs) are medical conditions or diseases that are not caused by infectious agents. While sometimes referred to as synonymous with "chronic diseases", NCDs are distinguished only by their non-infectious cause, not necessarily by their duration, though some chronic diseases of long duration may be caused by infections.