Appropriateness of care – how appropriate care is – may be defined as ’the degree to which provided healthcare is relevant to the clinical needs, given the current best evidence’.

Appropriateness of care can be assessed through different methods, the most robust one of which consists in examining how well medical practice complies with existing clinical recommendations. Another commonly used method is analysing the geographical variability of care practices.

In this report, six indicators of appropriateness affecting acute and chronic care have been selected; they relate to the application of clinical recommendations on diabetes patient monitoring (QA-1, QA-2), antibiotic or antidepressant prescription habits (QA-3 to QA-5) (antidepressants are developed in the Mental Healthcare section), use of inappropriate imaging techniques (QA-6) and inappropriate screening of breast cancer (QA-7).

Summary of the indicators on appropriateness of care​​

Some indicators analysed in other sections of this report may also be interpreted in terms of (in)appropriateness of care when their results are excessive compared to recommendations:

Diabetes is a chronic disease which is characterised by excessively high glucose levels in the blood. If incorrectly treated, people with diabetes are at a high risk of developing cardiovascular diseases (myocardial infarction, stroke) or kidney failure. Uncontrolled diabetes also increases the risk of visual impairment or lesions to the nerves and blood vessels which can lead to chronic wounds on the feet, or even to amputation. In Belgium, it is estimated that diabetes affects approximately 6% of the population (types 1 and 2 combined – 2017 figure).
Monitoring a person with diabetes consists in checking their blood glucose levels at least every 3 months, their blood glycosylated haemoglobin (HbA1c) levels (measuring the glycaemic ‘load’ in the blood) at least twice per year, as well as their microalbuminuria (a measurement of kidney function) and a blood lipid profile test at least once a year. An ophthalmologist also needs to perform a funduscopy (fundus of the eye examination) once a year.
This indicator measures the number of individuals with diabetes who have had each of these five tests done at the recommended frequencies during the last 15 months. It is calculated separately for diabetics taking insulin (QA-1) and for diabetics (over 50 years of age) who are treated with anti-diabetic medicines other than insulin (QA-2).

It has become a well-known fact that antibiotic consumption facilitates the development of resistant bacteria in humans and animals or in the environment, and that the current upsurge in such resistant bacteria today is a serious threat to all. For several years, the clinical recommendations have been unanimous: these medicines should only be prescribed when there is a verified need for them and when their effectiveness is scientifically proven. This, however, is far from being the case. For example, in the event of a viral infection (influenza, pharyngitis, etc.), antibiotics have no effect; yet they are massively prescribed in Belgium.

In addition, some powerful antibiotics such as quinolones and cephalosporins should be reserved for ‘second-line’ treatments (i.e. if a first antibiotic treatment has not been effective), so that the chances of curing serious and/or resistant infections are not ‘wasted’.

In May  2015, the World Health Organisation (WHO) approved a worldwide action plan for combating antibiotic resistance. In Europe, a European Surveillance of Antimicrobial Consumption Network (ESAC-Net) monitors the consumption of these medicines on an ongoing basis. Since 1999, Belgium has established a committee for antibiotic policy coordination (Belgian Antibiotic Policy Coordination Committee -, BAPCOC) which has developed a new strategy for 2015-2019 and defined several goals. One of these goals is to cut the number of antibiotic prescriptions by half by 2025.

In this report, we have selected 4 indicators related to antibiotic prescriptions on an outpatient basis: 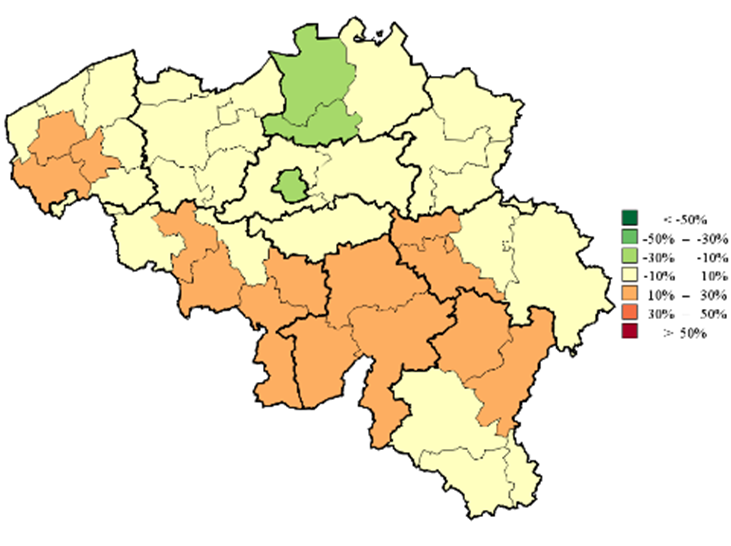 Exposure to ionising radiation (such as X-rays, for example) can cause cancer. However, in Belgium, this exposure is particularly high in the medical sector, essentially due to the excessive use of medical imaging exams (X-rays and CT scans). These exams are very often unnecessary and represent alone a very significant share of received radiation doses. As an example, a simple lumbar spine X-ray is equivalent to 680 days (nearly 2 years) of natural radiation, and a lumbar spine CT scan represents 1825 days (5 years) of natural radiation!  National campaigns organised by the FPS [Belgian Federal Public Service] and INAMI – RIZIV have been able to reverse this trend between 2009 and 2012 and to bring figures back to their 2006 level, but the radiation doses received by patients remain in the top tier of European countries.

Note: Magnetic resonance imagery (MRI) does not use X-rays or any other type of hazardous radiation, but its cost and the lack of MRI device availability are a problem.

In this report, we have selected as a primary indicator the number of prescriptions for spine examinations (X-rays, CT scans and MRIs), with a particular focus on lower back examinations, to the extent of the data available. Indeed, with reference to the national (KCE) and international (NICE/UK National Institute for Health and Care Excellence) clinical recommendations, as well as recommendations from the Belgian Radiology Society, these exams are most of the time useless, since their results generally have no influence on the suggested treatment. The use of medical imaging for the spine is therefore a particularly relevant indicator of the (in)appropriateness of care in Belgium.

As an indication, we have also counted the number of CT scanners and MRI devices available in Belgian hospitals. 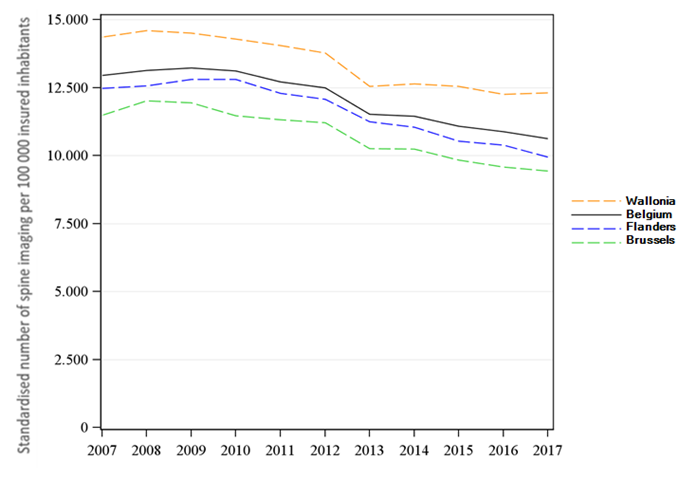 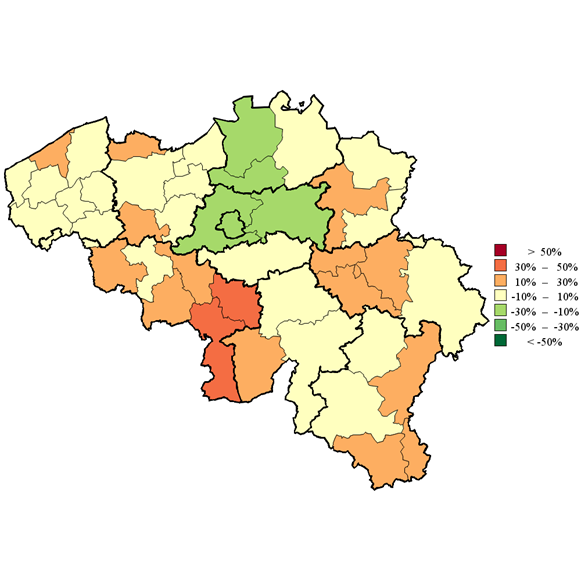 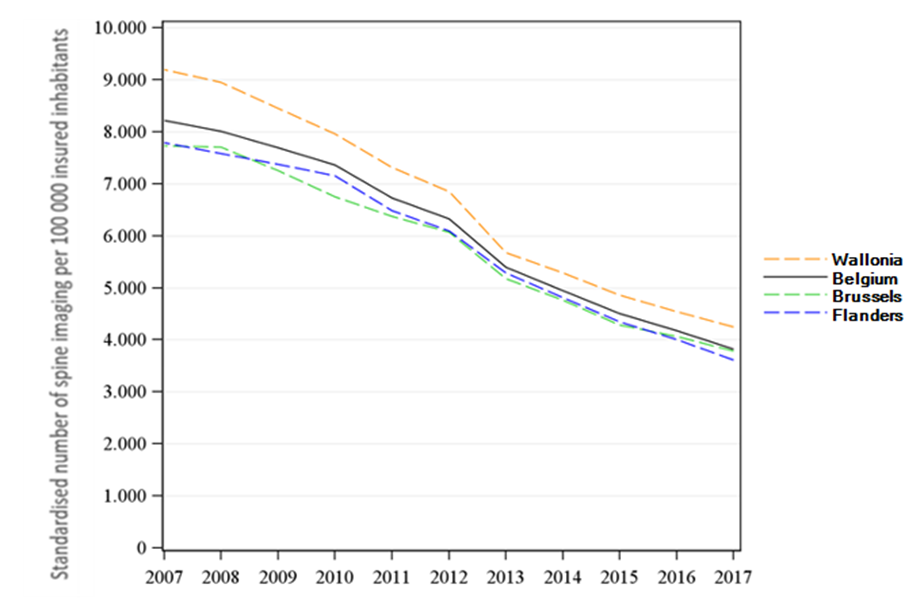 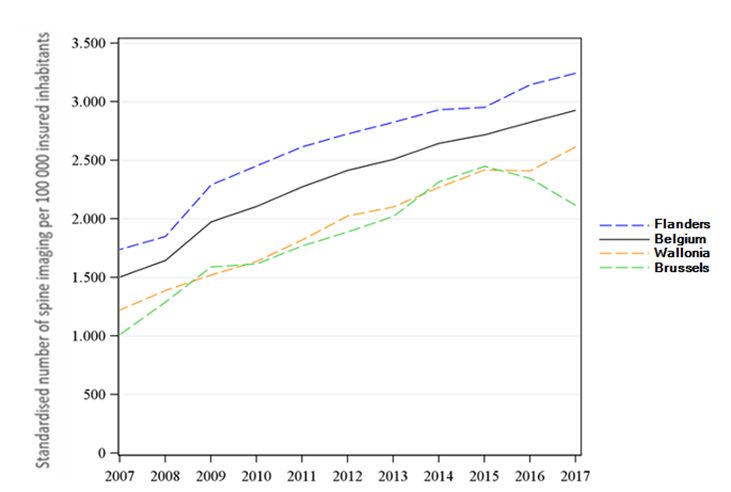 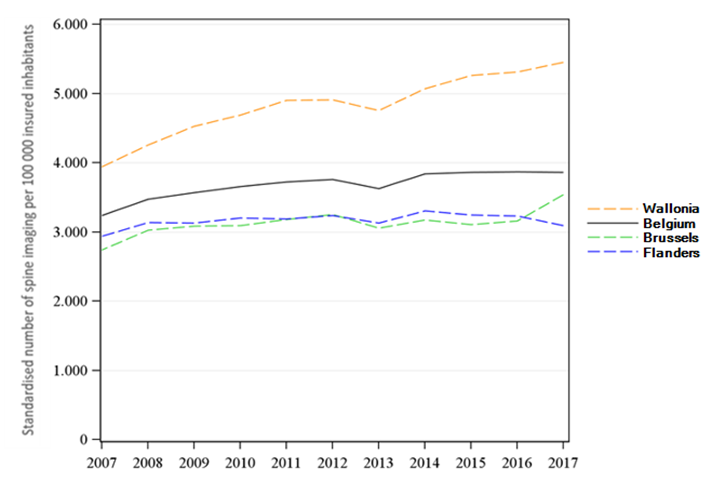 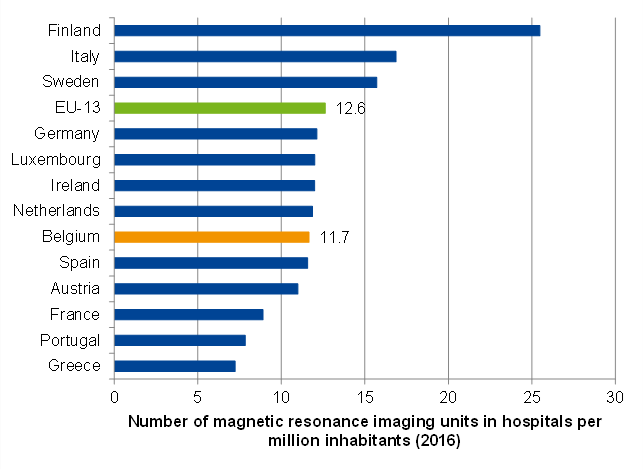 This indicator is developed in the section of preventive care indicators.