Giving every child and every family a good start in life still remains a challenge for our health system. In Belgium, the risk of death in newborns is low, but caution remains necessary as this risk could begin to increase as a result of the greater number of high-risk pregnancies, in particular due to the increasingly late age of future mothers, or the difficult economic situation of part of the population. ‘Avoidable’ risk factors in the mother (for example, obesity or tobacco use) are also associated with more complications for the mother and her child.

The importance of good maternal and neonatal health extends far beyond the period around childbirth, as it has been established that the origin of many pathologies (even in adults) can sometimes be linked to intra-uterine incidents. Protecting mothers and newborns therefore requires a holistic approach to population health, aimed at an overall, trans-generational improvement of public health.

The indicators that we have selected to assess mother and newborn care are focused on:

Summary of the indicator of performance for mother & child care ​​

The mortality rate during the neonatal period (i.e. until 28 days after birth) is a key measurement in the area of mother and child care, as it is a good indicator of the health system’s effectiveness and quality as well as of population health. In Western countries, the main causes for neonatal death are congenital abnormalities and complications related to very preterm births. The risk of neonatal death is also higher in case of multiple pregnancy.

Another indicator, which is less often used because it is more subject to caution, is the perinatal mortality rate, defined as the number of deaths occurring between the end of the 22nd week of gestation and the end of the first week of life. This indicator has also been decreasing since 2009. For details on this secondary indicator, please refer to the technical datasheet.

Fortunately, neonatal mortality is very low in Belgium. It should be noted that the ‘up-and-down’ appearance of the diagram is due to variations that are particularly amplified by the fact that the number of neonatal deaths is very low, as a single death more or less during one year can cause a marked difference. 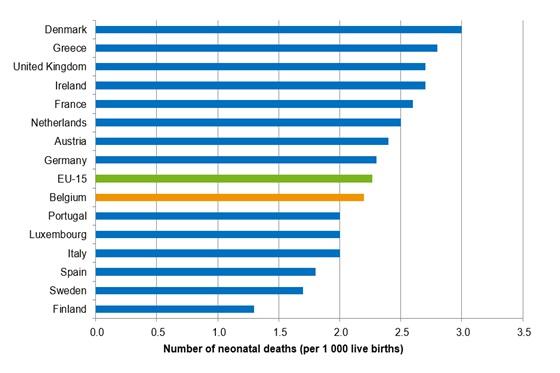 The Apgar score is a measurement which is systematically performed on all newborns at the time of birth. By noting certain characteristics of the baby (heart rate, respiratory rate, muscle tone, reflexes, and skin colour) after 1 min, 5 min and 10 min of life, a score from 1 to 10 is determined. A score of 10 indicates a fully healthy baby; a score below 7 is the sign of a serious problem. The lower the Apgar score, the higher the risk of death and/or disability.

This indicator assesses the proportion of newborns whose Apgar score after 5 minutes is lower than 7, which is considered as a reflection of care quality, and more particularly of the effectiveness of care to the mother and newborn. The proportion of newborns with an Apgar score lower than 4 is also shown (as a sub-indicator); this is the sign of emergency distress requiring immediate resuscitation procedures.

Childbirths by Caesarean section have been increasing throughout the world, approximately for the past thirty years. In 1985, the World Health Organisation (WHO) had recommended not to exceed a Caesarean section rate of 10 to 15%, but in 2010, some European countries were close to 35%. This increase has been attributed to various reasons, such as, among others, the reduction in surgical risk, the fear of professional responsibility issues in the event of a vaginal delivery with complications, or the possibility for physicians and patients to organise their schedules.

The Caesarean section rate is therefore an indicator of appropriateness of care to the mother and newborn. An analysis of geographical variations can also provide a powerful screening tool for identifying areas where the use of Caesarean sections is inappropriate. 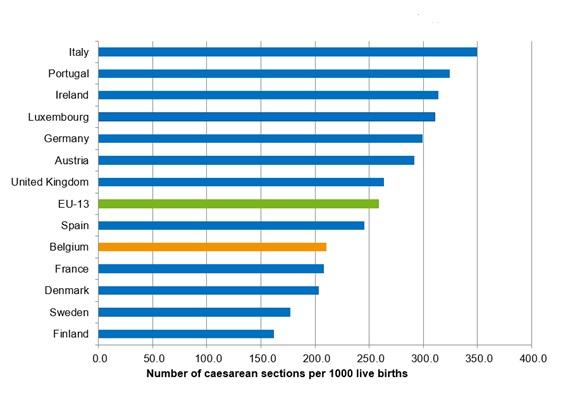 Public opinion is becoming more and more mobilised against the unnecessary medicalisation of childbirth, and in particular against artificially induced deliveries. The term ‘induced delivery’ (or ‘labour induction’) means triggering labour by using a medicine or by artificially breaking the waters, or inducing contractions after a premature breaking of the waters in a pregnant woman showing no other signs of labour.

KCE recommendations (2010) provide a very precise delineation of labour induction; it should only be performed in case of a major risk to the foetus or the mother, or in the event of spontaneous breaking of the waters, if labour does not begin spontaneously within 24 hours, or after 41 weeks of pregnancy (post-term). Any use outside of these limits may be considered as inappropriate. The induced delivery rate is therefore an indicator of appropriateness of care to the mother and newborn.

Proportion of deliveries with an episiotomy (MN-5)

An episiotomy is an incision performed in the vulva during delivery in order to widen the passageway for the baby and to prevent tearing of the perineum. This was common practice – nearly systematic – in the 20th century, but it is considered today as a symbol of the excessive medicalisation of childbirth. Its systematic use was called into question by many women wishing to have a more ‘natural’ childbirth, and serious scientific studies tend to demonstrate that an episiotomy should only be used when it is truly necessary.

The episiotomy rate in Belgium is therefore an indicator of appropriateness of care to the mother and newborn. It is also interesting to analyse the variability of practices among different maternity wards.

This indicator is therefore an indicator of appropriateness of care to the mother and newborn.

Between 1 and 1.5% of all births occur very prematurely (between 22 and 31 weeks of pregnancy). These events are therefore rare, but they represent 30 to 50% of all perinatal deaths. When these births take place in maternity wards which have a neonatal intensive care unit (NICU) where the child can be treated immediately, the chances of survival are greater. For this reason, it is recommended that future mothers who have a risk of (very) premature delivery be transferred to this type of maternity wards before the child's birth (intra-uterine transfer). The proportion of very preterm births occurring in maternity wards without a NICU should therefore be as low as possible.

Ideally, a pregnant woman should be monitored at regular intervals during her pregnancy in order to identify and treat any potential risk to the mother and the future baby. In 2015, KCE published a series of clinical recommendations defining which examinations should be performed at what stage of pregnancy (for pregnancies without any special risk). Some examinations do not need to be performed systematically and/or repetitively in all pregnant women as they bring no benefit, and can even lead to additional examinations which are not harmless and may give rise to unnecessary concerns. This is the case, in particular, of screening tests:

In June 2017, the INAMI nomenclature was updated: the new nomenclature codes for toxoplasmosis screening test cannot be billed more than twice during pregnancy, and cytomegalovirus infection tests are only reimbursed when acute cytomegalovirus infection is suspected. As the data for 2017 are not yet available, it is not possible to assess the consequences of the modification at this time.

These are therefore indicators of appropriateness of care to the mother and newborn.

Hospital length of stay for a normal delivery (MN-9)

The great majority of deliveries take place without any special problems: these are called ‘low-risk’ deliveries, for which the type of care is almost always the same. The length of stay is therefore practically identical for all mothers. In many countries bordering Belgium, the trend is clearly toward shortening the hospital length of stay and adding more care services at home performed by midwives and/or nurses. According to the Organisation for Economic Cooperation and Development (OECD), this tendency is accompanied by a reduction in costs, since hospital care is more expensive than home care.

In Belgium, policies aimed toward shortening maternity stays, with a shift to postnatal care services at home. According to a KCE report, length of stay under 72 hours are perfectly conceivable in Belgium provided that preparations are already made during the pregnancy and that great attention is paid to continuity of care as soon as the mother returns home. Several pilot projects have been launched in order to test the feasibility of various proposals for strengthening home care services.

The average length of stay for a normal delivery is an indicator used by the OECD to compare the efficiency of health systems on an international level.

Sub-indicator: Screening tests done outside the required deadlines in newborns

In all infants born at full term, a few drops of blood are systematically taken from the heel (the ‘heel-stick’ test) in order to screen for a few rare metabolic diseases whose consequences can be limited if treatments are initiated immediately. However, it is very important that these tests be done between the 3rd and 5th day of life, otherwise the test results may be erroneous.

In the current context of reducing the length of stay in maternity wards, these blood samples have to be taken more and more often at home by midwives, which increases the risk of delay. It is therefore important to verify that this change of practice does not give rise to a higher number of tests performed outside the required deadlines.

There are currently no centralised results for Flanders; we are only able to present here the results for the Wallonia-Brussels Federation, centralised by the ONE (Office de la Naissance et de l’Enfance)..

RESULTS
Average length of stay for a normal delivery: 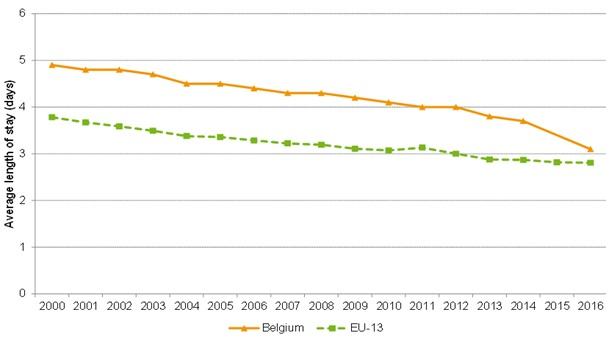 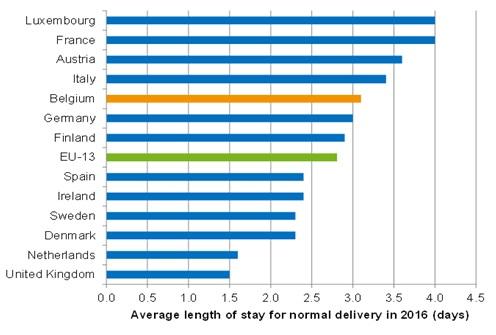 Screening tests done outside the required deadlines in newborns

For pregnancies involving no special risk, the recommended number of antenatal consultations is 10 for women who have never had children before, and 7 for women who have had children before, regardless of which type of healthcare professional is monitoring the pregnancy (gynaecologist, midwife, or general practitioner). In the past decade, midwives are increasingly often called upon by pregnant women for pregnancy monitoring visits. This increase should, in theory, be compensated by a reduction in the number of antenatal consultations with gynaecologists, otherwise one might consider that there is a redundancy (over-consumption of care).

The number of antenatal consultations and the analysis of the types of professionals involved is therefore an indicator of efficiency of care to the mother and newborn. 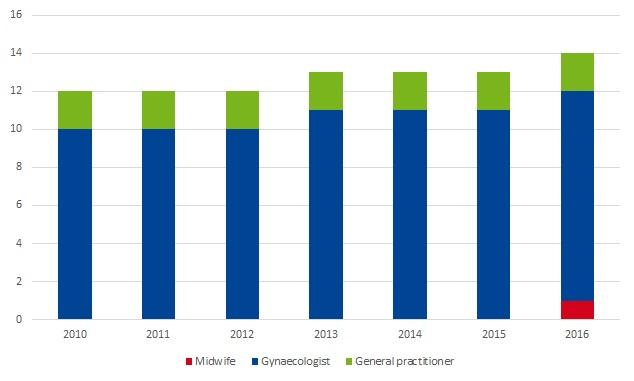