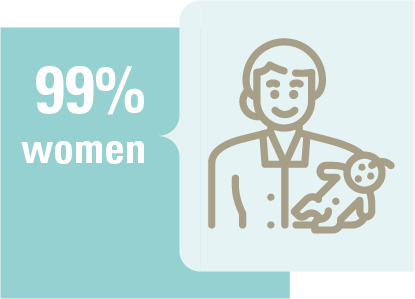 In 2019, 14,863 professionals were licensed to practise midwifery in Belgium. Of these, 57% were working in health care (i.e. 8,416 practising midwives), 14% were active outside the healthcare sector, 21% were not working in Belgium and 8% were retired.

Almost half of the midwives working in health care were under 35 years old.

DISTRIBUTION OF MIDWIVES BY ACTIVITY STATUS AND COMMUNITY, 2019

DISTRIBUTION OF ACTIVE MIDWIVES IN HEALTH CARE BY AGE, 2019

The density of midwives working in health care in Belgium was higher in the Flemish and Brussels-Capital Regions than in the Walloon Region (8.1 and 9.7 versus 5.2 respectively).

SECTOR OF ACTIVITY OF MIDWIVES WORKING IN HEALTH CARE IN 2019


PROFESSIONAL STATUS OF MIDWIVES WORKING IN HEALTH CARE IN 2019

In the midwifery supply and demand projection exercise, we find that the need for midwifery care by 2037 is expected to remain stable while the number of midwives active in health care is projected to increase by just over 30% between 2020 and 2037 (in individuals and full-time equivalents).