Healthcare accessibility can also be considered from the angle of the number of qualified practising healthcare providers in the country and the number of available beds in some healthcare sectors.
This information is also essential in order to plan the healthcare offer for the years to come.

In this section, you can find indicators on physician and nurse availability in general:

Some of the indicators analysed in other sections of this report may also be interpreted in terms of human resources accessibility:

Lastly, future projections about the expected number of healthcare professionals (S-4 to S-10) are discussed in the ‘Sustainability’ section.

Number of practising physicians (A-5)

This indicator measures the number of practising physicians per 1000 population.

It is considered that a physician is ‘practising’ if he/she has provided more than one clinical service (i.e. at least two consultations, visits or technical procedures – prescriptions are not counted here) during a given year. Physicians in training are not counted.

Until 2009, the calculation of physician density took into account all physicians licensed to practice (rather than practising physicians, defined as physicians having had more than 1 patient contact per year), which explains why, for a long time, Belgium showed one of the highest levels of physician density in Europe. These data have now been retrospectively corrected. 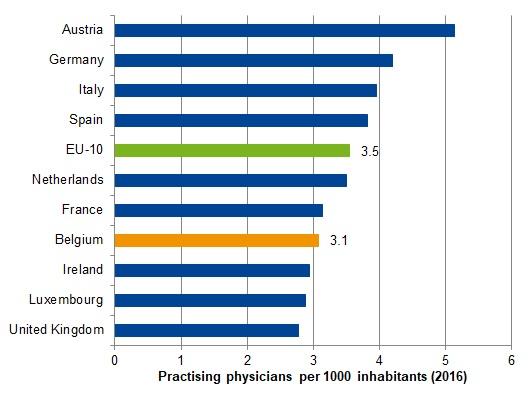 Number of practising nurses (A-6)

Nurses play a key role in delivering healthcare, whether in hospitals and other healthcare institutions or as part of first-line and home care services.
In most countries, nurses represent the largest professional group among all healthcare professions; a lack of nurses can therefore lead to accessibility issues (e.g. making waiting lists longer), or have consequences on quality of care (e.g. high patient-to-nurse ratio).
The PlanCAD Project, resulting from a combination of several administrative databases, helps to make a distinction between practising nurses in the healthcare sector and those who are professionally active on the Belgian labour market, also in other sectors than healthcare.

The secondary indicators are:

The distinction between practising nurses and professionally active nurses is the sector in which they work. Practising nurses work only within the healthcare sector and not on the rest of the Belgian labour market. 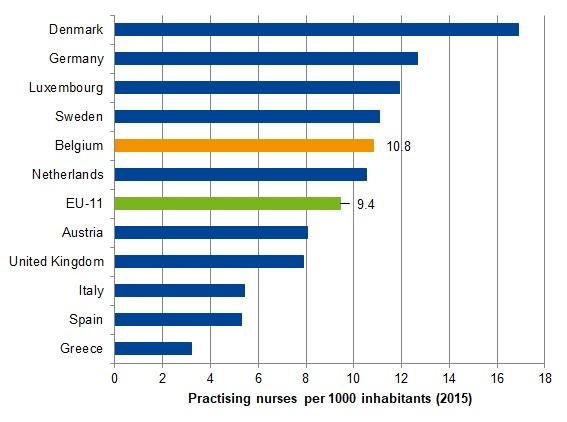 Note: At the OECD level, inclusion and exclusion criteria differ among countries, which makes international comparisons of these data unreliable.

Number of nurse vacancies in hospitals (A-7)

Since the early 2000s, nurse shortages have been reported in most industrialised countries, including Belgium. This problem could accelerate with population ageing (and the ageing of nurses).

The measurement of the number of vacancies is a contextual indicator which helps monitor this nurse shortage.

Average number of patients per nurse in hospitals (A-8)

The international scientific literature shows that nurse shortages have negative consequences on quality of care and mortality rates among hospitalised patients. It is therefore vital to use wisely the few nursing personnel resources that are currently available in order to limit this negative impact as much as possible. The number of Nursing Hours per Patient Day in Acute Hospitals would therefore be an interesting indicator in this regard.

However, the data that would allow to calculate this indicator are no longer collected due to administrative modifications. This indicator is therefore replaced by an ‘older’ indicator, which is the average patient-to-nurse ratio (average number of patients by one nurse in FTE). This indicator is derived from a European study (RN4CAST, 2009-2010) based on data from 500 hospitals in 12 countries. In 2019, the KCE has performed an update of this study using the same methodology for Belgium only. This indicator can also provide indirect information about quality of care in hospitals.

Link towards the technical sheet and detailled results

Link toward the KCE study